Microsoft showed its first public demo of Windows 8 on Wednesday, and it's not at all like the Windows operating systems you've come to know over the past 25 years. The next version of Microsoft's operating system ("Windows 8" is just a codename) is a radical departure, designed around touch screens. 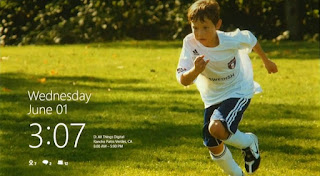 If this revelation is making you weak in the knees, worry not. Here's a handy FAQ on the early Windows 8 build that Microsoft demonstrated: 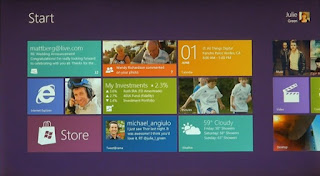 What Windows 8 features did Microsoft demonstrate?
Essentially, Microsoft showed how Windows 8 will work on both tablets and traditional PCs. The operating system's home screen is filled with big, touchable panels, like the live tiles in Windows Phone 7, and from there you can tap and swipe your way to other touch-based applications. But underneath that touchy layer is plain old Windows, with a task bar, file manager, app icons--everything.

How does the touch interface work?
From the start menu, which shows basic information like time and unread e-mail counts, users swipe upwards to reveal the home screen and its tiles. As with Windows Phone 7, apps can show some information within the tiles--users needn't click on the weather app to see the current temperature, for example. Swiping from the right bezel brings up a menu that can take users from an app back to the home screen.

Users can multitask between open apps by swiping across from the left bezel. And therein lies the coolest-looking feature of Windows 8: When swiping in a new app, users can snap it in place next to the app that's currently running. This allows users to view two apps at the same time--something that no existing tablet OS can do.

How will Windows 8 apps work?
Microsoft says it's created a new kind of app for Windows 8 using HTML5 and Javascript, and they're a lot like the apps you'd expect to find on a tablet. A weather app shows the five-day forecast. A news reader displays stories and thumbnail images in big, rectangular panes. Microsoft also showed off Internet Explorer 10, which is optimized for touch. Presumably Microsoft will distribute these apps through its own store--there's a "Store" tile in the version of Windows 8 that Microsoft demonstrated--but the company offered no details.

What about existing Windows apps, such as Office and Photoshop?
They'll still work. Loading one of these apps will bring up a more familiar version of Windows. According to All Things Digital, classic Windows apps will use "fuzzy hit targeting" to aid finger taps, but they won't be optimized for the touch screen like Windows 8's HTML5/Javascript concoctions. Legacy apps can, however, run side by side with the new Windows 8 apps.

But what about Windows PCs running on ARM chips? Will legacy apps run on those devices?

It's conceivable that ARM-based Windows devices will be restricted to the touch-centric user interface in Windows 8, but Microsoft hasn't made any announcements on that front. In fact, Microsoft recently denied claims made by an Intel executive about which apps will run on ARM-based Windows machines. Intel's Renee James had said to expect at least four versions of Windows for ARM processors, and that none of these versions would be compatible with apps from Windows XP, Vista or 7. Microsoft said these statements were "factually inaccurate and unfortunately misleading," but didn't clarify the matter with any details. In other words, the question is still unanswered.

When's the Windows 8 release date?
Microsoft CEO Steve Ballmer has said that Windows 8 will launch in 2012, but the company hasn't been any more specific than that. Expect more details on Windows 8 in September, when Microsoft will hold the BUILD conference for developers. For now, check out Microsoft's first video of Windows 8 in action:
this from:http://www.pcworld.com/article/229285/windows_8_what_you_need_to_know.html

Anonymous said…
Incredible! This blog looks just like my old one! It's on a completely different topic but it has pretty much the same layout and design. Wonderful choice of colors!
Also see my page :: Microsoft Tablet Computers
Monday, September 24, 2012 at 12:27:00 PM GMT+2