Apple’s  is official aanounce about new iPhone 5 , and despite being the sixth iPhone model (technically), we know it’s officially the iPhone 5.

Taller, thinner, and a metal back
As expected, the new iPhone is 18 percent thinner (0.30 inch vs. 0.37 inch thick) than the iPhone 4S. Apple says it's the thinnest handset around, but that's a race that changes often. That means it's also 20 percent lighter for a total of 3.95 ounces. The Retina Display expands from 3.5 inches (its size since the original iPhone) to 4 inches. The total resolution remains the same, though, at 326 pixels per inch. The total pixel count is 1,136x640, and we now have a 16:9 aspect ratio.
To the user, that means a fifth row of icons on the home screen. That's pretty nice since it will let you cut down on the number of home screens. You'll also get a full five-day week view in the calendar, the calendar will show more events, and all iWork apps will take advantage of the bigger display. Third-party apps that haven't been updated will continue to work, but you'll see black borders on each side (so they won't be stretched or scaled). Apple also promises that wide-screen movies will look better, with 44 percent more color saturation than on the iPhone 4S.


Touch sensors are now built into the display itself, which makes it 30 percent thinner as a result and less prone to glare.
The iPhone 5 also fixes a design flaw that we first saw in the iPhone 4. Apple replaced the glass back with one that's mostly metal. Too many people (us included) cracked an iPhone 4 or 4S after dropping it accidentally. We don't think the change negatively affects the iPhone's aesthetics. In fact, many might see it as an improvement. A return to a metal back reminds one of the original iPhone, and the crisp, clean-cut back has a bit of the feel of other Apple devices like the iPad.
All of the design changes result in a new iPhone that's surprisingly light to hold. Think 20 percent lighter isn't a big deal? Pick one of these up and you'll feel the difference: the iPhone 4 may have been dense, but the iPhone 5 is a featherweight.
The screen is big, bright, and crisp, too, not shockingly so, but a subtly improved experience. It's akin to being the extrawide comfy chair of iPhone screens. Stay tuned for more, but this new iPhone has a good hand feel. 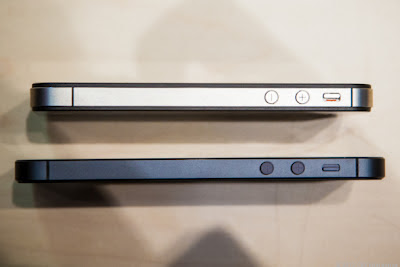 A faster chip
The iPhone 5 will offer an A6 chip, which is two times faster than the current A5 chip. Graphics will get faster speeds, as well. Yet, despite the speedier performance, the new chip will be 22 percent smaller than the A5. According to Apple's specs, users will see Web pages load 2.1 times faster, and the Music app with songs will load 1.9 times faster.
More battery life
LTE tends to be a power hog, but the iPhone 5 is set to deliver respectable battery life. Of course, the real story may differ, but here's what Apple is promising for now. We're supposed to get 8 hours of 3G talk time, 8 hours of 3G browsing, 8 hours of LTE browsing, 10 hours of Wi-Fi browsing, 10 hours of video playback, 40 hours of music playback, and 225 hours of standby time. You can be sure that CNET will put these promises to the test when we get a device in our hands.

Camera
The main shooter, or the "iSight" camera, stays at 8 megapixels (with the best resolution being 3,264x2,448 pixels) with a feature list that includes backside illumination, a hybrid IR filter, a five-element lens, and a f2.4 aperture. A dynamic light mode is new, and you should be able to launch photography apps up to 2.1 times faster. Another addition is an image signal processor in the A6 chip. That will bring spatial noise reduction and a "smart filter" that produces better low-light performance and captures photos faster. Finally, there's a built-in panorama mode that stitches shots together for one large 28-megapixel photo.

The secondary front camera now can shoot 720p HD video and it gets a backside illuminated sensor. And as we heard at the announcement of iOS 6 back in June, FaceTime will work over 3G cellular networks. Some carriers like AT&T have already announced restrictions for that feature, so be sure to check with your provider first.

Video resolution remains at 1080p HD, though image stabilization has been improved and face detection is now available in clips for up to 10 people. And in a nice move, you can take photos while you're shooting video.

Audio
The iPhone 5 gets an additional microphone for a total of three. You'll find one on the bottom, one on the handset's front face, and one on its rear side. What's more, the speaker now has five magnets (so up from two), which is apparently better and it's supposed to use 20 percent less space. The noise-canceling feature should be improved, as well, and there's a new wideband audio feature that promises more-natural-sounding voices. Twenty percent of carriers will support wideband audio, but so far we only know that Orange in the United Kingdom will be among them.

Smaller dock connector, smaller SIM card
On the bottom of the iPhone 5, there's that new and long-anticipated smaller dock connector. Called "Lightning," it has an all-digital, eight-signal design and an "adaptive interface" (we're not quite sure what that means yet). It's 80 percent smaller, and since it's reversible, both ends will be the same (that's kind of nice).


By all means, it's bound to annoy owners of current speaker docks, accessories, and charger/syncing cables since it will render them obsolete. Apple will offer an adapter and adapter cables (of course it will), which range from $19 to $39. We imagine, though, that the adapter may be awkward to use with some current accessories like a bedside alarm clock/music player. For new accessories, Apple says that manufacturers like Bose, JBL, and Bowers are working on new products.
Though we welcome the idea of a smaller connector, we're miffed that Apple couldn't just adopt the semi-industry standard of Micro-USB. That would make things easier for smartphone users across the globe. Yet, even so, the smaller connector may be a smart move for the future. The 30-pin connector has been around since 2003, long before the iPhone even existed: frankly, it's a dust magnet. A smaller connector helps shave extra space to achieve a smaller phone with perhaps a bigger battery. The new connector cable will mainly be used for syncing and charging by most people who own an Apple TV or Bluetooth/AirPlay accessories.

iOS 6
Inside, the iPhone 5 will debut with iOS 6 already onboard. Highlights include the new Apple Maps app, Passbook, shared photo streams, Siri updates, and the aforementioned FaceTime over 3G. For more on Apple's newest mobile OS update, check out our iOS 6 First Take. iOS 6 will be available for download next Wednesday, September 19.
Release date and pricing
The iPhone 5 will be available in three capacity models, all of which will come in black and white versions. The 16GB is $199, the 32GB $299, and the 64GB $399. On September 21, it will go on sale in nine countries: the United States, Canada, the United Kingdom, Germany, France, Australia, Japan, Hong Kong, and Singapore. Anyone in that first batch of countries can preorder starting September 14. More countries will follow by the end of this month, and by the end of the year, the iPhone 5 will land at 240 carriers in 100 countries. As a reminder, the U.S. carriers are the Big Three: Verizon, AT&T, and Sprint.
Is this the iPhone you've been looking for?
During very brief hands-on time with the iPhone 5, this much is clear: it's the weight you'll remember more than its thinner profile. The iPhone 4S is already a svelte device: most people probably won't spot the difference if they see the new iPhone from the side.
The screen size, also, is more of a subtle improvement. This isn't a jaw-dropping leap from the iPhone 4S: it's a gradual increase, done almost so cleverly that the front face of the iPhone 5 might, with the screen turned off, look very much like the iPhone 4S. The proof will be in the pudding for how app developers and iOS 6 take full advantage of that extra screen real estate, but the bottom line is this: more screen size and more pixels are good things.
The real killer app on this phone -- no surprise -- might be the iPhone's 4G LTE, as well as the promised battery life. If data speeds and battery life can live up to the promises, those alone will make many want to upgrade.

Anonymous said…
We stumbled over here different web address and thought I should check things out.
I like what I see so now i am following you.
Look forward to going over your web page for a
second time.
My website: auto approve
Friday, September 14, 2012 at 4:54:00 PM GMT+3